Most of the boats seen on the River Don nowadays are used for leisure. This is a very different scene to when the River Don was an important trading artery and part of the network linking the tidal Humber ports to the industrial cities far inland.

On the moorings today you will more than likely see narrow boats. But, narrow boats aren’t really native to this part of Britain, and while they were plying their trade in the West and South of the country on the narrow canals with their intricate ‘roses and castles’ decorations, the Yorkshire waterways were more suited for heavier, wider, deeper vessels.

There were two main types of Yorkshire barges – keels and sloops – although there were many variations within this tradition. They were built strong to withstand the tides of the River Humber and had a flat bottom in case they had to (intentionally or not!) spend low tide on a sand bank. They were big enough to carry a good cargo on the Humber, but at the same time were small enough to travel far inland – this meant they did not have to unload at ports and could carry on their journey unbroken, taking cargoes direct from suppliers to buyers. 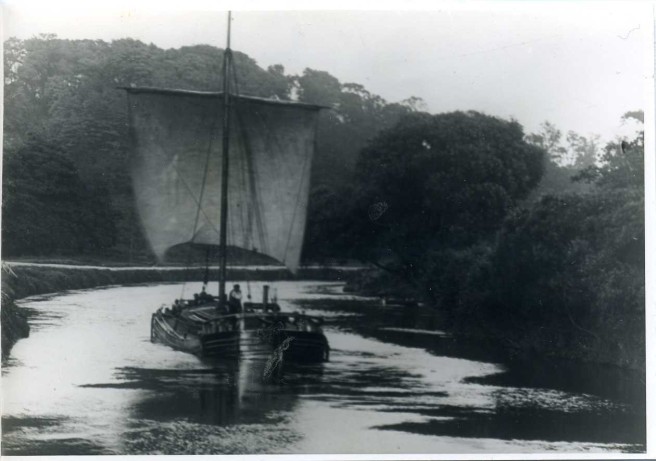 While the hulls of keels and sloops were very similar in design and construction, the sails were what marked them apart and suited them to particular jobs. For example, a keel has a single square sail, possibly with a top sail, and was more suited to work on the canals as the sail area was contained to the width of the boat. Whereas a sloop would have a triangular sail on a boom that was better suited to catching wind on the wider rivers such as the Humber, where there was space for the sail to swing out beyond the sides of the vessel. 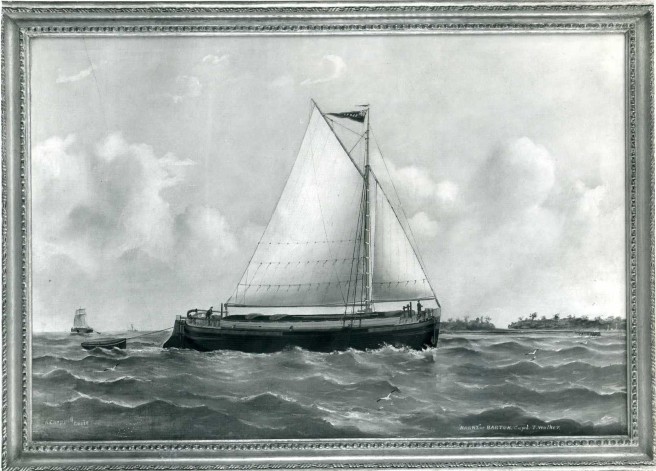 The dimensions of a keel and sloop depended on the particular water they were trading on and the size of locks they could get through. A ‘Sheffield’ sized keel, as the name suggests, would be able to get inland as far as Sheffield, and owing to the size of the locks on the Sheffield & South Yorkshire Canal could be no longer than 61’ 6” and no wider than 15’ 6”. A ‘West Country’ keel was not as the name would imply trading in Devon or Cornwall, but went as far as West Yorkshire from the Humber – it was therefore a few feet shorter to accommodate the smaller locks. A Humber Keel could be longer, typically up to 70’, but was constricted to how far inland they could trade.

During World War II, barge owners were encouraged to convert their vessels from sail to engines and received grants from the government to do so. So, in the 1950s the stunning sight of a keel or sloop in full sail had all but disappeared. New barges were built with engines only, and cargoes were motored around the region, until lorries became the preferred choice for transporting goods. 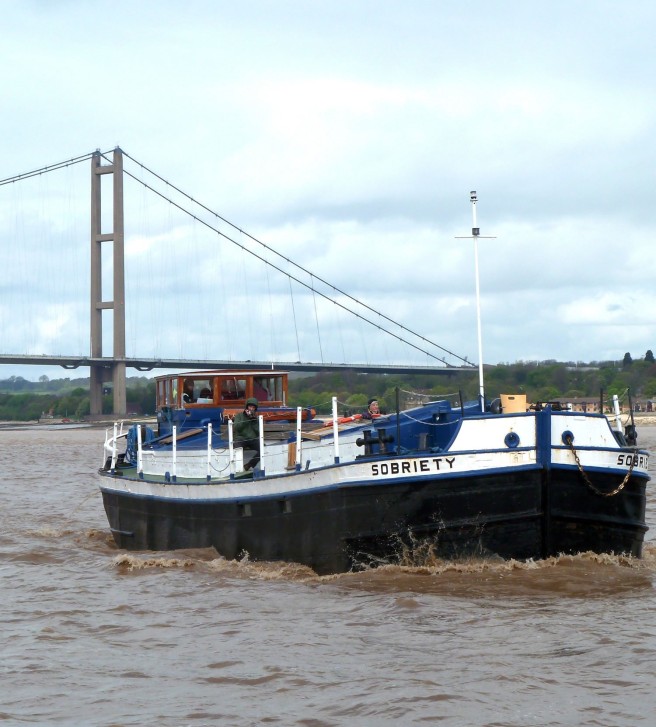 Sobriety was built as a sailing keel in 1910, and is now a residential barge that takes visitors on trips around the Yorkshire waterways. Here she is motoring on the Humber.

At the Don Network one of the things we are keen to do is encourage local communities to get involved in protecting and improving their own river environment.  To help do this we offer a number of small grants to community groups.  Although the amounts are relatively small they can make a real difference.  The grants are decided by the Trustees and members of the Don network and they look for projects which meet the priorities of the Don Network and in particular those that involve volunteers or the public.  The more people who get connected with the rivers the more people who will realise what fantastic places they are!

Sheffield and Rotherham Wildlife Trust and a band of volunteers used their grant to plant a hedgerow next to the river at Centenary Riverside Wetland Nature Reserve.  Once it grows up, the  hedge will provide habitat for insects and invertebrates and, in turn, the birds and mammals which feed on them. All contributing to make Centenary Riverside a great place to visit. 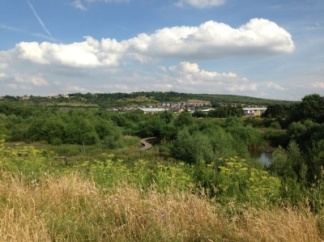 They targeted the area between Hillfoot Bridge and Livesey Street in Sheffield and cleared footpaths, riverbanks and waterways (including removing four fridges) as well as tackling invasive species, most notably Himalyan Balsam.  Some of the volunteers were environmental conservation students from Hillsborough College.  As well as helping remove the fridges from the river they also took the opportunity to learn how to report environmental incidents and about invasive species and freshwater invertebrates.

Phoenix and Parkgate Angling Club at Ravenfield Park near Rotherham used their grant to create floating vegetation islands in the pond margins. Once established these will provide habitat for insects, shelter for fry and remove nutrients from the water. 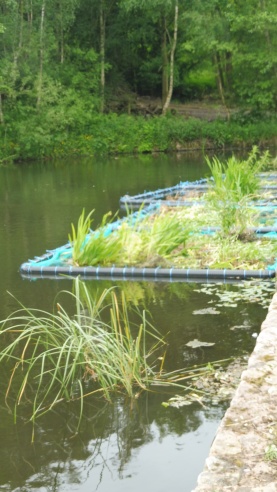 This year’s grants include a project to clear and restore the riverside at Sprotbrough falls and fish stocking at Carlton Marsh.  This will benefit the Cudworth Dyke as surplus fish will spill out into the stream during periods of high flow helping to build populations in this rapidly recovering watercourse.

Signal crayfish are a non-native species which cause considerable harm to the ecosystem and potentially the economy. They are carriers of the crayfish plague, (a water mould that infects crayfish), to which they are resistant but other crayfish species are not, and it is pushing the White Clawed Crayfish closer to extinction. The White Clawed Crayfish is already classed as endangered due to this.

Signal crayfish have a faster growth rate than the native White Clawed Crayfish and this means that resources get taken by the non-native species before the White Clawed Crayfish has chance to mature. There are numerous ways to spot the differences between the two species, as the White clawed crayfish has a white underside to its claws compared to the singular white spot on the claw hinge of the Signal Crayfish. Both crayfish have different colours, the White Clawed Crayfish is an olive-brown colour while the Signal Crayfish is a blueish-brown to reddish-brown colour. The general sizes of the crayfish can be very similar as the native species can grow up to 12cm, but sizes under 10cm are far more common, while the Signal Crayfish can grow from anywhere between 6cm and 18cm. The habitats for both species are very similar, as they both live in freshwater rivers, lakes or streams where there is little to none salt content.

Signal Crayfish can cause economic damage as they burrow up to 2 metres into the riverbank which weakens it, but it only gets worsened as they can have multiple burrows intersecting with each other which causes the river bank to be weakened significantly more.  This can cause riverbanks to collapse which then makes it a flooding risk to buildings on the riverbank and can be a risk to livestock safety.

Both of these species of crayfish are present within the River Don and this is problematic due to the endangerment of the White Clawed Crayfish.

A Signal Crayfish. Photo by Andrew Gray  / CC BY

We are looking for people help deliver our Heritage Lottery Funded ‘Living Heritage of the River Don’ project:

I read a startling prediction the other day. By 2025 it is estimated that the world’s oceans will contain 1 tonne of plastic for every 3 tonnes of fish, and by 2050 the accumulated plastic may well outweigh the fish1.

Of course these figures are rough predictions that assume current trends continue, but despite the uncertainty, it’s indisputable that a tremendous amount of plastic is entering the oceans.

This plastic can have deadly consequences for aquatic life. A big conservation problem facing turtles for example is that they eat floating carrier bags, which they mistake for their jellyfish prey. Plastic can also get caught around the necks and limbs of sea creatures, cutting into flesh and often killing the animal as it grows.

A gannet with plastic caught on its bill. Photo by Bo Eide / CC BY

Overtime plastic debris breakdown into microscopic particles that accumulate in ocean gyres or rain down upon the sea bed. The impact of these microparticles is hardly understood, but there is no doubt that they are infiltrating almost every part of the marine environment including the fish we eat.

Very sad that some sea birds inadvertently kill their own offspring by feeding them plastic, as the parents of this albatross chick must have done. Photo by U.S. Fish and Wildlife Service / CC BY

While the greatest inputs of rubbish into the oceans generally come from poor countries that have inadequate systems for dealing with waste, you only need to take a look at the detritus dumped by the River Don after high flows to appreciate that we British are very much part of the problem. Just last month an autopsy on a Cuvier’s beaked whale that had died off the coast of Norway found 30 plastic carrier bags in its gut, which probably caused its death2. Tellingly, labelling on the plastic contents of its stomach was largely in Danish and English.

Even a fish as sleek as a salmon can fall victim to rubbish. Photo by Caz VanDevere / CC BY

The sad story of the whale and alarming predictions made me realise that I have underestimating the importance of the river cleanup work that the Trust has been doing. I had tended to focus only on the aesthetic improvements, which is very important in making riverside spaces pleasant places for local communities, and a good enough reason alone to clear up rubbish. But next time I see the bags of rubbish collected by Trust staff and volunteers I will feel doubly satisfied to know that waste won’t end up harming river or marine life.

If you are interested in volunteering with the Trust see our Get Involved Page. 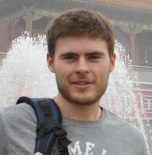