Nature experts and enthusiasts alike gathered at the Hidden Heritage Secret Streams Bioblitz this May, with the aim to count all the birds, bugs and beasties they could find on the riverside in just one day. The Bioblitz took place on an important wildlife site in Chesterfield, rarely opened to the general public.

After a day of exploring, the watermeadows were found to be home to 104 different species. 23 different species of bird were heard or spotted, with finds including green woodpecker, buzzard and a very tuneful skylark. Footprints, skulls and burrows also revealed signs of mammals, including roe deer, fox and hare. 62 different invertebrates were discovered, including fascinating insect eggs and Scentless Plant Bugs, pictured below.

The blanket of wildflowers across the site included yellow water-lily, colts-foot and bird’s foot trefoil. Invasive, non-native species were also recorded, such as Giant hogweed and Himalayan balsam.

During the event, DCRT’s director Ed Shaw, led a guided walk across the site to explain plans for the restoration and regeneration of the river Rother.

Sara Pexioto, from the University of Sheffield, demonstrated how new technology in DNA studies can help us identify water-dwelling wildlife. Sara said “All living organisms leave traces of DNA in their surrounding environments, reflecting their current or past presence. Using environmental samples (eg. water or soil) and genetic tools we can now detect any living organism more efficiently”

Thank you to all the volunteers and recorders that came down to survey the site. If you would like to see the full species list please click here: River rother Bioblitz results.

Today marks the final day of Volunteer’s week and we want to say a huge thank you to all our volunteers across the Don Catchment!

So far this year the Friends of the Don Valley Way have organised 14 of their own litter-picks and conservation days. Volunteer Susan organised a fantastic balsam bash this Tuesday, clearing an entire river Don bank-side of the invasive species, Himalayan Balsam. 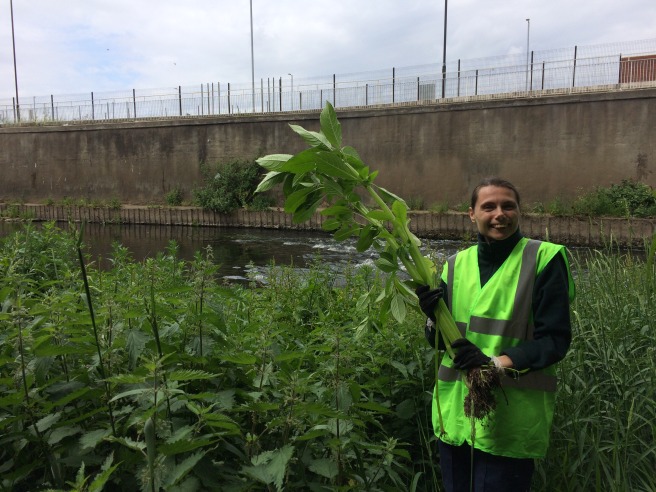 After the balsam bash

Our Volunteers in Chesterfield on Thursday ‘donned’ their waders and cleared out 5 trolleys from the Holme Brook.

Everyone was rewarded with lots of cake during tea-break!

This year so far, a total of 64 volunteers in Chesterfield have dedicated over 46 days to cleaning up our rivers and removed 213 bin bags of litter! Our education volunteers, citizen scientists and community archaeologists have also been hard at work inspiring the general public, investigating the river Rother’s wildlife and exploring its industrial history.